The talking rocks of Florence between silence and mystery - Poem 13 of Saga Orfeo and Shakespeare against the plague....

Our luminaries went down to Florence in search the hidden verse. The plague seems to adorn the city with an irresistible charm: this fortress smells of ancient! Pegasus said moved and fascinated. The stones of the Ponte Vecchio whisper: the path to heaven begins in hell, as Dante recited in his Divine Comedy, but they laugh and their mockery is truly liberating. The human Comedy has a thousand facets and that of today's poem is the most sublime. How many crosses must be exhibited to get closer to salvation? When they reach Santa Croce, the statue of Dante can be glimpsed but the basilica is a marvel that silences the plague… 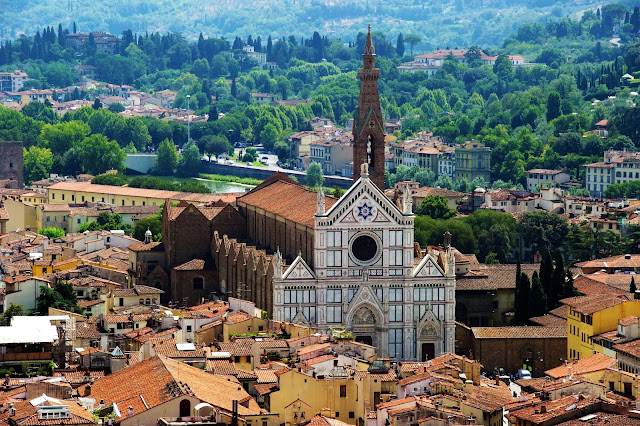 Title: The talking rocks of Florence between silence and mystery ...

In the wonderful bucolic landscape

Where Florence chose its splendid bed

It is read in courtly language

The rowing verse shines from its hiding place

Will it come to us or will we come to him?

But does the charm of this city illuminate these dark times?

And the plague? On the old deck we heard voices

And it was the stones that spoke and laughed with mockery

If the path to heaven begins from hell?

Will this pain still serve to adorn our crosses?

The plague combines horror and mystery ...

We have the task of deciphering the great enigma

And he added. The worst is to think that everything is hell!

At the Basilica of Santacroce, in the middle of the path

Next to the churchyard we saw the statue of Dante

Even stones and rocks have a soul

It is made of an illegible and pedantic alphabet

Where letters need a glue

how I wish the Arno did not have a mouth!