J’Acuse,18 August 2021 on the withdrawal of Western troops from Afghanistan and the return of the Taliban to Kabul. Failure of the theory of building democratic nations by force "

J’Acuse, 18 August 2021 on the withdrawal of Western troops from Afghanistan and the return of the Taliban to Kabul. Failure of the theory of building democratic nations by force " 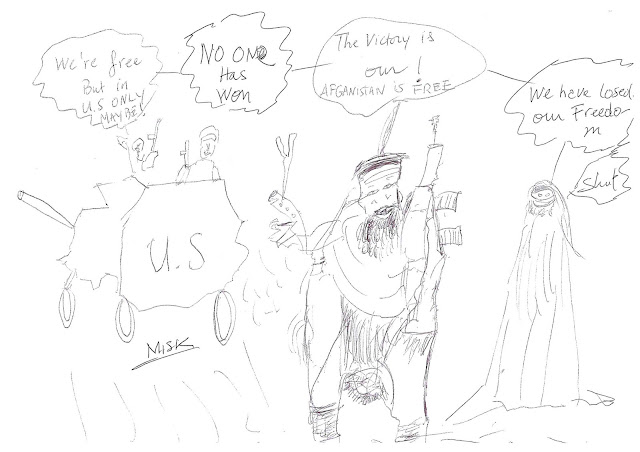 Why do Americans leave Afghanistan?

It is really surprising to see US President Joe Biden recognize the decision to withdraw from Afghanistan, motivating it not so much by the very fact of being an agreement inherited from the Trump administration, but by the very original and interesting idea that "America cannot build democratic nations… ”A reflection must be made on this matter in the light of this statement, bearing in mind its regional and international repercussions.

Twenty years of Western military presence weren't enough to build a democratic nation! How many resources have been used and how many victims have fallen but nothing has been enough to pacify this tormented country. That radialist and Orthodox identity fought and accused prevailed.

And why? Let us ask ourselves insistently. Let us try to reflect deeply on this story by drawing the necessary lessons from it. Why did Biden talk about building nations? Obviously something is wrong. In other times, Europe itself would have been abandoned to its fate. I am referring to the context of the post-war period, when the Americans, champions of democracy, winners of the Second World War decided to support the young European democracies against the advance of communism. Those were other times, of course, and if President Truman had opted for another isolationism of America at the time, I believe we would never have known the economic, social and political development that led to the establishment of the European Union as we know it today. Even today, the American military presence in Europe is of vital importance for the stability and security of the old continent. This example, however, is not antithetical or superfluous to our central theme. It demonstrates how important political and planning will is in building peace and democracy in general.

But what had gone wrong in the Afghan case?

The "Nations", even before the "Democracies", have a deep root in history. The European Union itself, just mentioned, built with the decisive American help, is a mixture of Nations, Cultures, Languages ​​and Races difficult to manage, in perennial conflicts, without roots in history, nor common ideals and heroes. Yet it is the political will that still holds it up despite the countless crises experienced so far. With the advent of Trump, populism and Brexit, this economic giant has faltered, but its strength is still fragile and under test. Building a nation, sorry, a group of nations, which have the same sensitivity and the same ideals, proves to be as difficult as it is impossible with the passing of time.

Let us now return to the Afghan affair where Americans and Europeans ventured to build, in their imagination, that democratic and tolerant nation which in the end they decided to abandon to its fate. What are the regional and international links? Although Afghanistan is an ancient nation and has had glories and splendors in past centuries, today it appears as a theater of misery and desolation that arouse fear and bewilderment. The coup against the monarchical regime in 1973 and the constitution of the Republic constituted that event that led the country to perennial instability, which in the context of the Cold War, led to the invasion of the country by the Red Army in 1979. It could be said that the deepest and most original evil was precisely foreign interference, in the plural, in the country considered a strategic point and very rich in mineral deposits in the Middle Eastern chessboard. The Soviet intervention and the automatic Western intervention in the country to counter it gave rise to those lacerations between the cultural and ethnic components of the country. The establishment of the Resistance composed of the Mujahideen was done by the CIA. Armed and trained by the Americans, they were the founders after the end of the Soviet occupation in 1989, of Al Qaeda, of which Bin Laden was the top leader. Now if you look carefully, the genesis of the radicalism that gave birth to these subversive groups was a result of the various American and Soviet interventions. The Afghan culture before then did not know this fanaticism and this madness. "All this evil came to distort and alter the peaceful and tolerant nature of our nation," Afghans would say, sorry for their fate. Communists, warmongers, crazy bearded men who misinterpret the Koran, have come to harm our nation.

What Islam teaches its faithful is to respect the different and tolerate the one whom God has not yet decided to enlighten. "Taking life without having the right to it is like killing the whole of humanity". The Taliban, however, prevailed in this clash. I appeal to them: you have a great historical mission before you: to restore luster and splendor to that Afghan nation in the plural, safeguarding its specificities and cultures. Islamic civilization had triumphed only when it had protected the rights of minorities, of women and invested in science and progress. The first word that came down to the Prophet Muhammad is: "study". So study and be an example of tolerance and coexistence. President Biden’s statement about the constitution of nations is primarily about you. Be able to build an Afghan nation that is an example for others. Don't be unfair. Treat the weakest with justice and kindness. Open your minds to healthy progress. Authentic Islam is science and progress. Let the children of Afghanistan be free and have rights and dreams like all the children of the earth. The stakes are high but only knowledge and wisdom can restore the country the peace and prosperity it deserves.

Biden's concept of nation building introduces a political earthquake in international relations. Libya and Iraq are two countries where foreign interference is heavy. They were "normal" nations ruled by brutal dictatorships. Today they are nations under construction and here too the concept arouses outrage and anger. The military strength of Westerners is often blind and not at all respectful of the rights of those nations. Imagine if the Americans withdraw from Iraq tomorrow. What is the chaos we will see there? And wasn't it better to direct Gaddafi's Libya towards democracy, rather than annihilate it with the demolition of his regime?

The contradictions are many. Only arbitrariness and violence are the destroyers and inventors of nations. Military force is the source of an artificial right that lasts as long as it finds. Authentic nations last forever when they know how to maintain and cultivate that metaphysical cement which unites them and which cannot be built with weapons. Only the Afghan people, as well as the Libyan and Iraqi ones, can constitute or I would say reconstitute that national identity, the result of myths, heroisms and resurgences, which the great nations have in their DNA.

In conclusion, I agree with the decision of the American withdrawal. America will have to re-establish its relations with the world on a basis of dialogue and respect. Only in this way can we build a better world.