J'Accuse of February 16: why the NATO wants to surround Russia? The enlargement to the east is perceived as a threat to the Russian Federation.

It is clear that the genesis of all the problems is only one: the idea of ​​enlargement to the East, both of the European Union and of NATO, and in some way the mother of all nonsense. I'll explain it to you in a few lines.

The original project of a Europe that goes from the Atlantic to the Urals is now, in the current situation, impracticable otherwise even counterproductive. We have seen how the construction of the European Communities, born in 1957, with the initiative of the main Western countries, on the ruins of the Second World War, was conceived as a great idea matured in the minds of the politicians of the time to build a European space of economic prosperity and political understanding. Over the decades that followed this great idea was consolidated but clashed with national political selfishness. It was then decided to create a common monetary and economic space in the hope that the economic reforms gradually launched would also give that political push to harmonize and unify Europe politically. Europe, however, wallowed in its irreconcilable cultural, historical, political and often economic diversities. We have seen how the eastward enlargement of the European Union, born on November 1, 1993, in Maastricht, the Netherlands, has undoubtedly highlighted these differences and I would say fundamental incompatibility with some countries of Eastern Europe. This enlargement, hasty and led by unscrupulous minds who only aimed to enlarge the European internal market, clearly brought very few economic and political benefits to the countries concerned, but obviously did not give rise to that idea of ​​a "large, cohesive and single nation" ", so much dreamed of by the founding fathers. The lack of common cultural and historical references, typical of Eastern countries, moreover, complicated by paths and approaches and visions often diametrically opposed to those of the founding countries of Western Europe, constitute precisely that almost insuperable obstacle to the realization of a political union. . I would not like to dwell on this premise. But I would like to point out how different the political lines taken by the countries of Vizegrad, for example, are compared to those of the founding countries of the Union. My question to you now: what political and economic benefits has this east enlargement brought to Western Europe?

It is clear that when we tackle the other burning issue of NATO enlargement, we are equally aware of the obvious contradictions and underlying inconsistencies. I'll explain it better:

J'Accuse of February 16: why the NATO wants to surround Russia? The enlargement to the east is perceived as a threat to the Russian Federation. 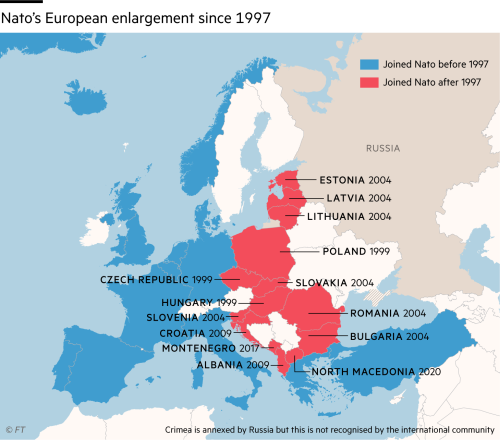 Once the Berlin Wall fell and the Soviet Union dismantled, the role of this military organization created to counter the opposite of the then Warsaw Pact had to be redefined: who were the enemies of the security of the Atlantic countries?

Somehow the enlargement to the East, in an era like the one after the fall of the Berlin Wall, had never been agreed with the Russians, since at that time this question was indifferent to them, because they had many other problems inside their country. to be resolved, but this gradual enlargement was felt by their security officers as an advance towards their borders. And why? Ask yourself why NATO wanted to win all the spaces around Russia? In truth, although Gorbachev was promised informally, that this would never happen, that is, that such enlargement would never happen, NATO had implemented it because nothing was written at the time, black and white, which guaranteed the strategic spaces around. to the Russian Federation. This request to guarantee in writing the rules on security in Europe comes 33 years after the fall of the Berlin Wall from an isolated Russia, sanctioned and marginalized by Western countries, for various issues related to the wars in North Africa, Libya, Syria, Iraq and Ukraine . Today, as since Putin came to power, the Kremlin no longer accepts this line of enlargement, considered to be a threat to his country, at a time when the grip of economic sanctions weighs heavily on the Russian economy. If the end justifies the means, as Machiavelli would say, to what end would bases be established on the Russian border?

In this climate of the impelling winds of a war that risks spreading, the European leadership seems resigned to this inflexible and uncompromising line of President Biden. His predecessors are regretted for not having pushed the tension with the Russians this far. Let him take responsibility for him if a nuclear war breaks out with Moscow. President John Fitzgerald Kennedy, during the Cuban crisis in 1962, when "the fingers were ready to press on the buttons", told himself that he was thinking of the children of humanity and said that, we have lived up to now, we also give to the our children the right to do so. Biden today seems inclined to think only of NATO enlargement projects. The vi